Happy SysAdmin Day! In the run up to this important day, we encouraged sysadmins to share with us a funny meme of their creation illustrating stereotypes associated with their jobs. The results illustrate a widely misunderstood profession – by users, colleagues and the society! All the winning submissions made an attempt at humor. Are you in for a chuckle? Here is the list of winners:

“Some folks think I have it easy as a Sys-Admin, playing online games and surfing the interwebs all day. HA! The only ‘wizard’ I play is in real life! My ‘magic’ fingers are constantly keeping things running smoothly behind the scenes. THAT’S why they think I don’t do anything, because things are working and they don’t need me to fix anything for them since I’ve already fixed it before they even knew they needed help! (PS – Yes, that’s really me in the second pic…first pic, not really me ????“

Michael, who ain’t got time for your secrets:

“Most think I see everything; spy. Even though I don’t have the time, resources or inclination.“

Angie, who shops only after putting out fires *cough cough*:

“I work in a Health Center. Folks here have very minimal knowledge of what IT does. At times we are called the Police or Nerds, My boss thinks i’m in complete control of the chaos, while I shop on Amazon (after all the work is done of course..cough)“ 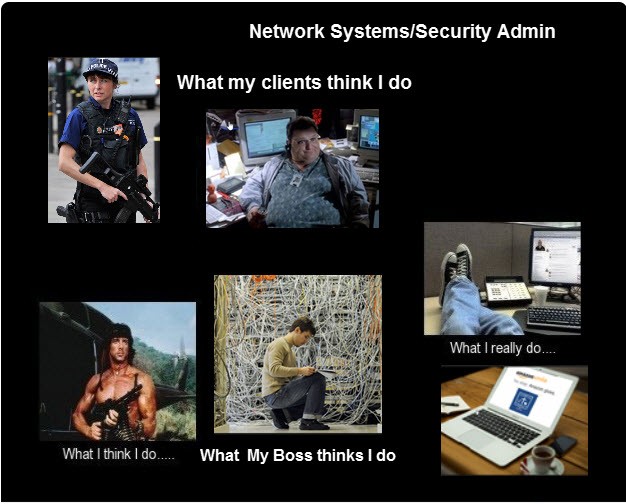 Jacub, the network admin that dodges bullets at work:

“Should be doing cool guy networking with satellites, routers, switches, and domain controllers, but instead deal with very army unique computer accidents that make you face palm.” Gabriel, the IT guy that googles better than you:

“Everyone thinks the IT department is a waste of money, “Why can’t we just get rid of IT and just buy regular computers from Wal-Mart instead.” We think the world cannot run without us. We are just good at searching the issue.”

“While most people would think that I am satisfied with rebooting a problem machine, I’m actually way more content to destroy the ever-living crap out of it with a hammer.”

Mike, who wants you to know geek is chic:

“You know, nerd culture is mainstream now. So, when you use the word “nerd” derogatorily, it means you’re the one that’s out of the zeitgeist” – Ben Wyatt. I’m more than just a nerd, I’m a person dang it! Also, I don’t play video games or live in a dark hole somewhere ????“ “My friends know I like to take things apart. I think I am a hacker. I really just sit and watch progress bars all day long.” All jokes aside – sysadmins spend their days troubleshooting, problem solving and firefighting to make sure users are productive. They seldom get to turn in for a well-deserved rest and rarely get recognized. If you still haven’t shown appreciation to your sysadmins, there’s still time to get in on the festivities! Check out this blog for ideas.

Thanks to everyone who submitted a meme or shared our contest with your sysadmin friend! Winners will be contacted via email before August 4, 2017.