Where can I find my driver on WinPE?

You may receive a “A connection to the deployment share couldn’t not be made. The following networking device did not have a driver installed.” wizard error if you import the wrong driver, or are missing the driver on WinPE. If you suspect there may be something wrong with the drivers you imported, you can use this blog post to find where the imported drivers are placed on the WinPE boot image. 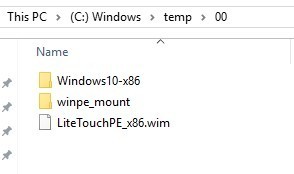 Step 2: Mount the WIM file with DISM to an empty folder

In this case the winpe_mount folder will be used.

Open a CMD prompt as administrator and run this command:

You can see that the empty folder winpe_mount will be mounted with your boot image.

Let’s check to see if there are any drivers imported in the winpe_mount folder from the CMD prompt with this line:

My results show only one 3rd party driver from the driver store.

But first, I want to add my own driver to winpe_mount. I will use my driver folder Windows10-x86 and the .inf file named E1D6532.inf.

Let’s go back to the third party driver check and see if we can see more drivers this time.

Now my WinPE reports that it contains two drivers, the second one is named oem1.inf which is the new one I’m looking for.

Go into mounted windows\inf folder and look for oem1.inf. It will be the same as the E1D6532.inf file we pointed out earlier. Where are the rest of the files from my folder? They are in the mounted Windows\System32\DriverStore\FileRepository folder. Look for a folder with the same name as your original info file. In my case it was a folder that started with E1D6532. I found a folder called e1d6532.inf_x86_b9469c95c4fcc245

Here you can see all the files that were imported manually with DISM.

If you import drivers from a folder in the Deploy OS admin tool, it will find all *.inf drivers it finds in the folder you pointed.