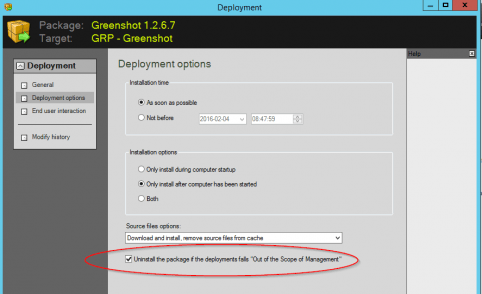 Greenshot is an open source screenshot tool, similar to the Windows Snipping Tool, but with more functionalities – and it’s free. In this blog, I will demonstrate how to install an open source application such as Greenshot with Specops Deploy / App in a simple and standardized way.

There are three steps you need to follow for deployment:

Make sure that the application can be installed silently. Download the application to the c:\temp folder on a test machine. Open a command prompt as administrator and run the application with the silent switch /? – in this case: Greenshot-INSTALLER-1.2.6.7-RELEASE.exe /?

When you see the silent switch, select /VERYSILENT: Greenshot-INSTALLER-1.2.6.7-RELEASE.exe /VERYSILENT is the correct switch for a silent installation.

Many open source applications use an uninstall.exe file under the program files folder after the installation. I found an unins.000.exe in c:\program files\greenshot.

I tried the same silent switch for the uninstall like this: %ProgramFiles%\greenshot\unins000.exe /VERYSILENT

You cannot uninstall the application if it is running. You need to close the application first or run a command called TaskKill during uninstallation, see the Uninstall.cmd part below to copy the working solution.

The application automatically looks for new versions. You should disable the application update as most users are not local admins, and should not be presented an upgrade option.

All I have to do now is to put all three steps into deploy /app.

I created two script files in the root folder called Install.cmd and Uninstall.cmd allowing my x86 package to be installed and uninstalled on both x86 and x64 windows OS without any problems.

The root folder where all four files reside should look like:

Now I can create a new legacy package in Specops Deploy / App that points to install.cmd.

The uninstall command should be: %SpecopsDeployExecuteDir%\uninstall.cmd 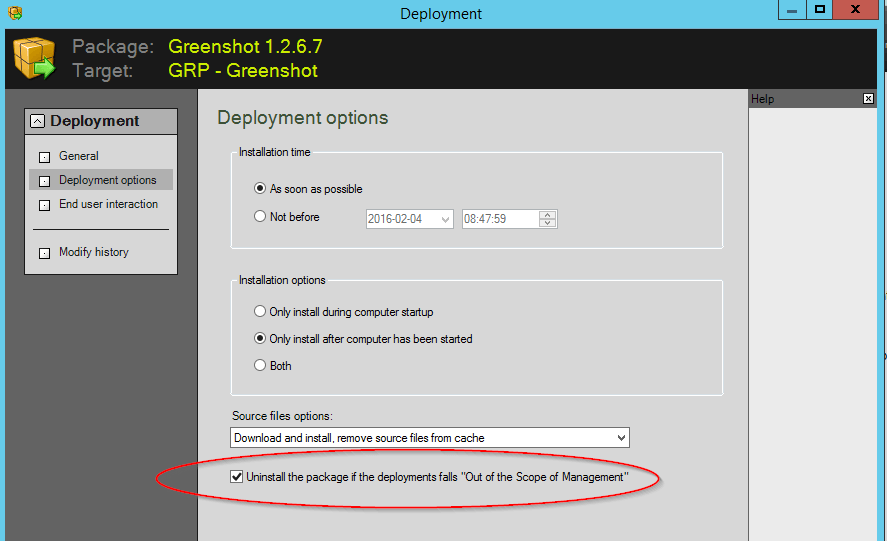 Enable the Uninstall the package if the deployments fall “Out of scope of Management” checkbox.

Now you will have a working Package that will install, uninstall silently and not update on its own over internet. The package will also work on both x86 and x64 platforms.