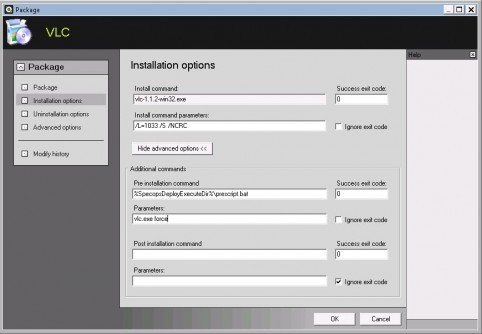 Sooner or later, the installation will go through when those apps are not running, or if you choose during computer startup. Though, until that happens, you may see the Office setup reporting Error in the installation.

It could also be nice to be able to kill the process if it’s running and thus make sure the app is not running and is able to be upgraded.

Here is a small script you can use and modify to either just detect if a process is running, and then wait with the upgrade. Or, kill the process and then if successful let the setup continue.

Just save this script in the same folder as your .msi file or setup program.

And then use the Pre Installation Command feature. In this example I’m trying to upgrade VLC and want to force an update even if the process is running.

I’ve used: %SpecopsDeployExecuteDir%prescript.bat
That means that the prescript.bat will be executed from the same folder as my setup process.

Parameters: vlc.exe force
Force means, search for the process vlc.exe and kill the process if it’s running.
If you only specify vlc.exe it will just be detected and not killed.

The script example is currently accepting just one process. But it shouldn’t be too hard to expand it to cover for example; winword.exe, excel.exe, outlook.exe and powerpnt.exe at the same time.