Azure AD Password Protection comes included in P1/P2 Azure AD plans. The name indicates that users are protected from using bad passwords, but that’s not the case. If an organization is serious about securing its Active Directory environment, whether on-prem or in the cloud, Azure AD built-in “protections” are not enough.

To pass Microsoft’s password filter, a user’s password must score 5 points. The use of a banned word is worth one point but that alone does not disqualify a password.

First, the password entry is converted to all-lowercase. Microsoft states that common leetspeak character substitutions are also reversed; however, some common substitutions like €→e and 8→b are ignored.

The normalized entry is checked against the banned lists for exact matches +/- 1 character difference.

The normalized entry is also checked against the user’s first name, last name and tenant name; however, partial matches like Jeff for Jeffrey are ignored.

Specops Password Policy can block the full or partial use of a user’s first or last name.

The entry must pass all of the above checks and reach a score of 5 to be accepted.

Unlike Specops Password Policy’s Breached Password Protection, the Global Banned Password List does not include third-party data like that of Have I Been Pwned (HIBP) or other known breached password lists. Microsoft instead relies solely on its own analysis of what passwords are being used in various Azure AD environments. Microsoft does not disclose any of the contents of its list.

Microsoft does not state the number of passwords on the list. They do mention it is small compared to other third-party lists but that with fuzzy matching it can block millions of password variations of the words on their smaller banned list.

The Custom Banned Password List has a limit of 1000 words, and each entry must be at least 4 characters long.

Three letter combinations are common for many companies. This 4-character limitation means you can’t block:

Breached and Other Compromised Passwords

The infamous password breaches, Collections leaks #1-5, contain over a billion compromised passwords. Microsoft ignores them along with other third-party and real attack data in its Global Banned Password List, leaving users vulnerable.

Below are just a few examples of the most common complex passwords found in Collection #2 along with ones our own threat research team has discovered being used to attack Windows networks right now. Both sets pass Azure AD’s filter.

The password scoring used in the Azure AD Password Protection is complicated, and IT admin logs will tell you a password was rejected because it was found on the global or custom banned list but not tell you which.

This lack of transparency on rules for what is required means that the IT service desk will struggle to successfully identify issues users are having with setting passwords. 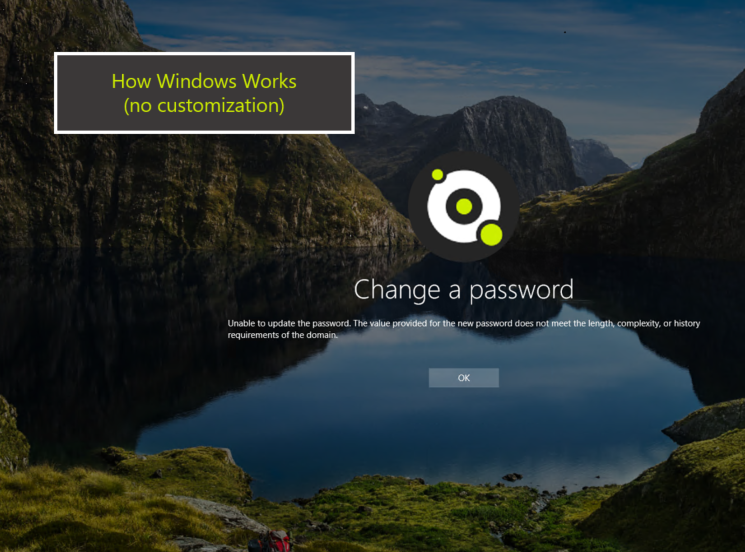 Azure AD Password Protection has no control over the specific error message displayed by the client machine when a weak password is rejected. Azure AD does not permit admins to customize the standard Windows error messages users see upon password rejection.

This is the only message users will see no matter the reason their password was rejected when changing or resetting their password on their machines. 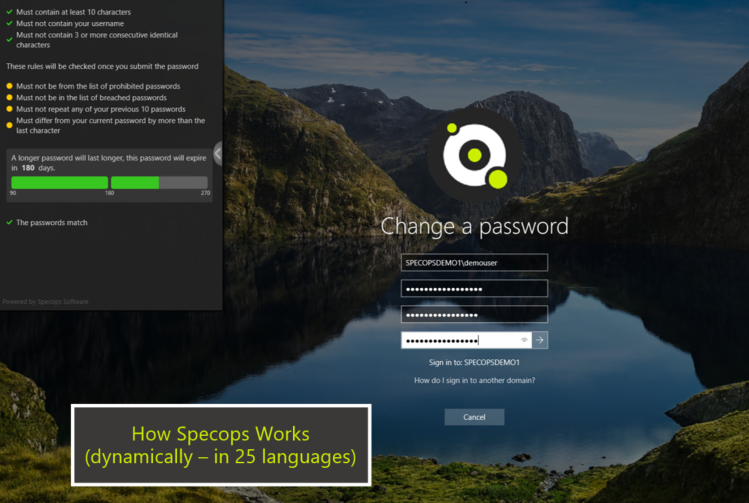 You don’t need to abandon Azure AD or O365 to implement stronger password policies or to block users from using leaked passwords.

Specops Password Policy can target any GPO level, group, user, or computer with password complexity, dictionaries and passphrase settings.  With Specops Password Policy and Breached Password Protection, companies can block over 2 billion compromised passwords in Active Directory. These compromised passwords include ones used in real attacks today or are on known breached password lists, making it easy to comply with industry regulations such as those from NIST or NCSC. Our research team’s attack monitoring data collection systems update the service daily and ensure networks are protected from real world password attacks happening right now. The Breached Password Protection service blocks these banned passwords in Active Directory with customizable end-user messaging that helps reduce calls to the service desk. Breached Password Protection is available as a secure list in the cloud or stored locally in your environment.