Support for Specops uReset (7.12 and earlier)

View Support for a different product
Didn't find what you're looking for?

Search our Knowledge Base

Specops uReset™ is the next generation password reset solution by Specops Software. The solution revolutionizes password security by utilizing claims-based identity to provide flexible multi-factor authentication as a means of addressing the password reset security and flexibility needs of organizations. Specops uReset is a self-service solution that enables end users to address the most common tasks related to password management including forgotten passwords, locked out Active Directory accounts, and password resets and changes.

The process of changing a forgotten password. A password reset can be performed by a user who verified their identity using multi-factor authentication. The user can reset their passwords using the uReset web, which can be accessed from any (non-ancient) web browser, including mobile phone browsers.

IT administrators can select, based on role and security policy, which identity services/authenticators they want to extend to end-users to verify their identity when resetting or unlocking their accounts. Such flexibility can ensure that varying security and flexibility needs are met. For example:

To use various identity services to authenticate users, the identity service must be configured (enabled) in the administration console, and the user affected by the uReset policy must enroll in the uReset service. Once a user has enrolled, they can reset their password using the uReset Web Application (via a hyperlink on the login screen or on any modern browser) or the uReset Mobile App (iOS, Android or Windows Phone). The Specops uReset Server uses data from user objects in Active Directory to read and write information used in the system.

The following identity services can be used to authenticate users in Specops uReset:

Users are required to enroll with the uReset service. The enrollment process will vary for each type of identity service. To enroll with a personal identity service such as Google, the user will need to follow the link from the Specops uReset web application to the Google web page, and login with the email address and password associated with your Google account. When a user affected by a uReset policy utilizing Google enrolls in the service, a unique identifier is stored on the user object in Active Directory.

A policy contains the rules required for enrollment and multi-factor authentication. A policy controls what identity services can be used, and how many must be used to verify the identity of a user. The system owner is responsible for configuring the rules in the policies.

Specops uReset consists of the following components and does not require any additional resources in your environment. The uReset Server, uReset Web, and Security Token Services are hosted in the cloud. You will only need to install the Administration Tools, Gatekeeper, and Authentication Client. 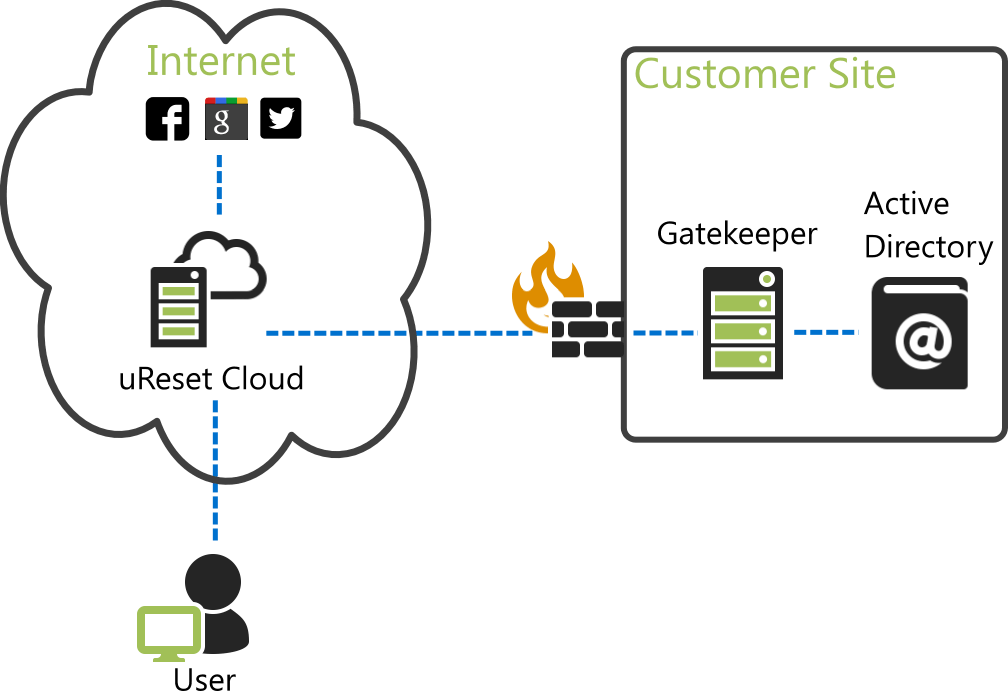 uReset Administration Tool: Configures the Gatekeeper and enables the creation of Specops uReset settings in Group Policy Objects. If you are not using the Specops uReset Cloud Service, the administration tool will also contain installation information for all uReset components and help you configure the database connection.

External Identity Services: Some of the identity services that are used during authentication, such as Facebook, or Google, are external. When an external identity service is used, the user will be taken to the login page for the corresponding identity service. When the user performs a login, standard OpenId and Oauth2 protocols are used. If the login is accepted, a token will be returned to the uReset Cloud.

Specops uReset uses industry standard protocols. NET 4.5 and upwards provides the functionality for WS-Trust and WS-Federation. OASIS is among the specifications for WS-*. WS-* is a collection of specifications that, for example, describe how to implement secure Web services and communication over the Internet. WS-Trust introduces the concept of STS and outlines the messages that are used for requesting, issuing, and renewing security token, whereas WS-Federation specifies the language to use for expressing how to address the security needs of the scenarios.

The solution is delivered as a hosted cloud service. It is a multi-tenant solution running on the highly reliable and secure Microsoft Azure cloud. For more information about Microsoft Azure, visit:

The Specops uReset Reporting feature allows you to track your enrollment process and provides several reports on enrollments, events, and identity service utilization.

The Helpdesk feature can be used to verify the accounts of users, using any of their enrolled identity services, or by sending a text message, containing a code, to the user’s mobile phone. Once a user has been verified, the helpdesk can set a new password, and require the user to change their password at next logon. The Helpdesk also displays user statistics, and information, including the star requirements for enrollment / reset, and the weight assigned to each identity service in the policy.

Specops uReset allows the administrator to assign a specific weight for each identity service, ultimately deciding that one identity service is worth twice as much as another during authentication. In the user interfaces, for both the end users and administrator, the weights are represented by stars.

The Specops Authenticator app is a high trust identity service, which turns the mobile device into a secure token device.  The app generates a secret code that users must provide in addition to their username when authenticating their identity during a password reset. The codes generated are based on industry standard Time-Based One-Time Password Algorithm security tokens as such Specops Authenticator can work with both Google and Microsoft Authenticators.

Specops uReset contains a mobile application, available in Windows Store, Google Play, and App Store, that can be used as a secure alternative to reset passwords and unlock accounts. The mobile app is available to any organization that permit users to reset their password remotely.